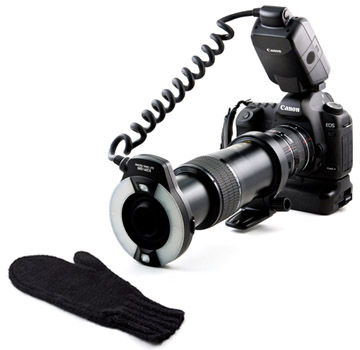 Snowflakes: These tiny creations of winter have been a curiosity during most childhoods spent in Canada. As I grew up, I became less and less interested in these “trivial” curiosities, and only recently reconnected with them through the lens of my camera. As with most macro subjects, when photographing snowflakes there are many “what the heck is that?” moments as something mysterious is captured, and that childhood curiosity is reborn.

Using a steady hand, an old mitten, and freshly falling snow, you can produce an image capable of sparking that childhood wonder in even the most jaded onlookers. Some people don’t believe my images are real, and that’s when I know I’ve created something worth talking about. Of course, some people simply think I’m crazy watching me take pictures of an old mitten in a snow storm.

The entire crystal cannot be completely in focus in any one frame, so multiple images are used to put the final photograph together. 30-50 images on average are used in the creation of the snowflake photograph, though hundreds of images are taken to ensure that no slice of focus is missed. Each snowflake is shot entirely handheld, without the use of a tripod. The images are created outdoors in cold temperatures so the snowflakes do not melt, and only the freshest snow will do; Snowflakes that have been resting for even an hour will begin to lose their delicate crystalline features. Timing is everything!

The average time spent editing a snowflake image is four hours. This intensive process combines the focus from multiple images, corrects for shifts in perspective and alignment, and deals with the transparent nature of snowflakes. The process goes further to create a clean background and adjust the colours to be as natural as possible. Some snowflakes have vibrant displays of colour trapped within their branches and centers – almost unbelievably, this colour is entirely natural.
Please browse the gallery below consisting of hundreds of snowflakes, and don’t forget to check out the 304pg hardcover book! The book covers all of the science and explains how snowflakes grow, and also delves into the entire photographic workflow.
[ngg_images gallery_ids="4" display_type="photocrati-nextgen_pro_masonry" ]